As Hales Group Limited employs more than 250 people we are required by law to publish an annual gender pay gap report showing the difference in average female earnings compared to average male earnings over a standard time period, regardless of role seniority.

This is our report for the snapshot date of 5 April 2021.

As per our previous reports, we have broken down our calculations because we operate in a number of completely different employment sectors, and the jobs and levels of pay and bonuses are not obviously comparable. We have, however, also provided an indication of the gender pay gap within our organisation as a whole.

Our gender pay gap results should be considered in the context of this distribution, as the predominance of females to males has an influence on our overall gender pay gap figures. 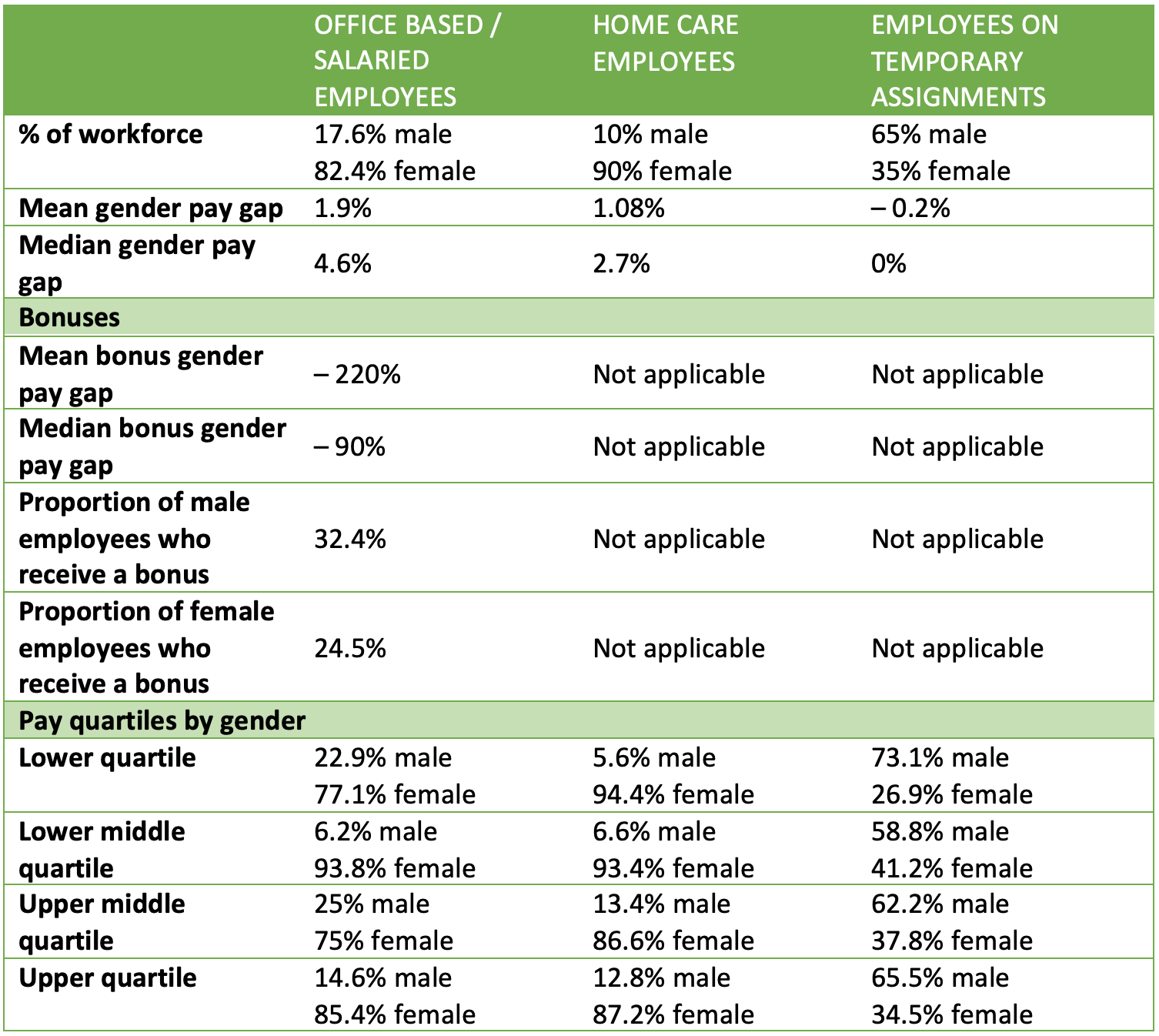 Women make up 82.4% of our office based/salaried workforce and 84.2% of the top 10% highest earners in this grouping.

Our median gender pay gap has dropped to 4.6% (from 8.2%). These figures put us significantly below the national average according to the Office for National Statistics.

The distribution of males and females across all quartiles is relatively proportionate to their respective representation in the workforce as a whole.

This is the most heavily female-dominated grouping with 90% females and only 10% males. There remains a near-zero percentage figure for the mean pay gap in this group of employees. There has been a slight increase in the median pay gap which is up from 0% to 2.7% however this remains significantly lower than the national average of 7.9%. We have a consistent distribution of males and females across all quartiles – this is due to the fact that employees are concentrated in the same pay grade, which reveals no gap between the pay of typical male and female employees, and completely equal pay overall.

Pay rates in the sector are largely dictated by local authority contracts and funding for community care and also National Minimum Wage legislation.

This grouping of employees remains more evenly balanced than other groupings (65% male to 35% female). This is similar to last year’s distribution, however, we are pleased to report a mean gender pay gap of –0.2% (–2.5% last year) and a zero median gap (– 2.4% last year).

Males are slightly more represented in the lower and lower middle quartiles however the distribution of male and female workers across all quartiles remains fairly evenly balanced, which is reflective of the diverse range of industry sectors and professions for which we recruit.

Bonus payments are only applicable to office based/salaried staff and include any profit sharing, productivity, performance, incentive and commission payments.

The mean bonus gender pay gap is –220% and the median bonus gender pay gap is –90%, however this is influenced by the overall representation of females not only making up the significant majority of top earners in the company, but also our overall predominance of females within our workforce. The significant negative median bonus gender pay gap is attributed to the fact that the 92% of the total bonus payments was paid to females. However, the proportion of males and females receiving bonuses (32.4% versus 24.5%) is marginal and we uphold that female relevant employees are no more or less likely to receive any amount of bonus payment compared to male relevant employees, with all employees paid in accordance with the same bonus structure; we just operate in a heavily female-dominated industry.

When looking at the overall workforce across all three sectors, the mean gender pay gap is 4.8% (up from – 1.8% last year) and the overall median gender pay gap is 1.8%. Despite the increase in the gender pay gap, we remain significantly lower than the UK average. The less-than 2% median gap reflects our continued commitment to providing equal opportunities across our business. At Hales Group Limited, everyone is paid for the role they have in the team and for their performance in that role. No other factors affect an employee’s remuneration. Hales is an Equal Pay employer – men and women performing equal work receive equal pay.

Objectives
The results of our gender pay gap analysis are extremely positive once again this year, and we will strive to maintain these results by continually applying diversity, inclusion and equality initiatives.

I confirm that Hales Group Limited is committed to the principle of gender pay equality and has prepared its 2022 gender pay gap results in line with mandatory requirements.

I confirm that the information in this statement is accurate.

Looking for a career in Home Care?

Are you looking for a career that offers variety, flexibillity and freedom?
If the answer is YES, then fill in the form below or call 0800 124 4765 and get started today!

This website uses cookies to improve your experience while you navigate through the website. Out of these cookies, the cookies that are categorized as necessary are stored on your browser as they are essential for the working of basic functionalities of the website. We also use third-party cookies that help us analyze and understand how you use this website. These cookies will be stored in your browser only with your consent. You also have the option to opt-out of these cookies. But opting out of some of these cookies may have an effect on your browsing experience.
Necessary Always Enabled
Necessary cookies are absolutely essential for the website to function properly. This category only includes cookies that ensures basic functionalities and security features of the website. These cookies do not store any personal information.
Non-necessary
Any cookies that may not be particularly necessary for the website to function and is used specifically to collect user personal data via analytics, ads, other embedded contents are termed as non-necessary cookies. It is mandatory to procure user consent prior to running these cookies on your website.
SAVE & ACCEPT